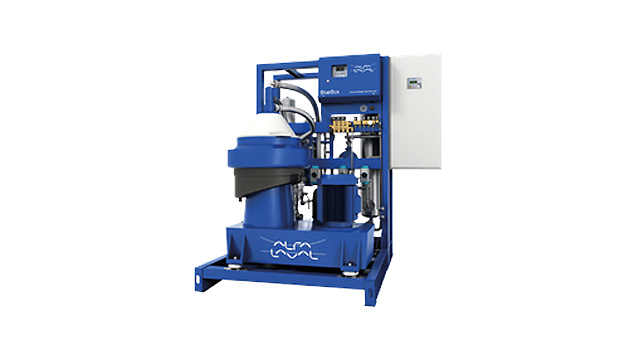 PureBilge features a patented XLrator disc inlet, which gently accelerates the oily water as it enters the separator bowl. This prevents the splitting of oil droplets and the formation of additional emulsions, which gives PureBilge a substantial edge over other centrifugal oily water separation systems.

Certified according to IMO resolutions, MEPC.107 (49) and US Coast Guard document 46 CFR 106.50, PureBilge is designed for unmanned 24/7 operation.

Certified in accordance with IMO regulations, MEPC.107 (49) and US Coast Guard document 46 CFR 106.50, PureBilge is designed for unmanned 24/7 operation.

Man-hours are not required for operation or supervision. Also, there is no reject to pump ashore and no need to transport land wastes such as filter elements, coalescence elements, active carbon, or flocculation deposits. This contributes to reduced operating costs.

Easy to install in any engine room

Designed for plug-and-play installation, PureBilge is a compact and factory-tested oily water separator module that is easy to install in any engine room. Continuous operation means that there is no need for large oily water holding tanks, which frees up space and increases payload capacity.

PureBilge oily water separator includes a broad range of options that further simplify installation and maintenance. Choose the optional equipment that suits your requirements and the existing conditions on board:

PureBilge oily water separator is a fully automatic, all-in-one system with a pumping stage, a preheating stage, and a centrifugal separation stage, with full process control and monitoring. It comprises a BWPX 307 high-speed separator, a control cabinet housing an EPC 60 bilge process controller, a valve and pipe rack and a feed pump module.

A feed pump with variable-frequency drive control directs oily water into the PureBilge system from the oily water settling tank or its equivalent.

After passing through a strainer that traps large particles present in the feed, the fluid passes through a heat exchanger that raises its temperature to the required level for optimum separation efficiency (generally 60-70ºC).

A three-way changeover valve then directs the fluid to the separation stage if all process conditions, such as feed temperature, feed pressure and separator speed, fall within preset process values. If any process condition is not met, the valve re-circulates the fluid back to the oily water settling tank.

The patented XLrator laminar flow inlet device gently accelerates the oily water into the separator bowl with a minimum of shearing and foaming. This greatly improves separation efficiency by preventing the splitting of oil drops and the further formation of emulsions. This is the key to PureBilge’s superior performance, compared to other centrifugal separation based systems.

The PureBilge disc-stack centrifugal separator rotates with a gravitational force of 6,000 G generated at 8,000 rpm. Oil and emulsions are separated from the oily water and discharged continuously through the oil outlet. Solids that collect at the separator bowl periphery are discharged intermittently at preset intervals and are directed to a collecting tank for sludge or waste oil.